ARMYs Suspect BTS May Have Spilled On Jin’s Love Life

BTS celebrated their 9th anniversary with the annual FESTA Dinner Party. It included lots of chaotic moments as the members had some drinks and natura

BTS celebrated their 9th anniversary with the annual FESTA Dinner Party. It included lots of chaotic moments as the members had some drinks and naturally got emotional as they reflected on the past and future. Yet, one Jin-focused moment, often overlooked, has some netizens talking. 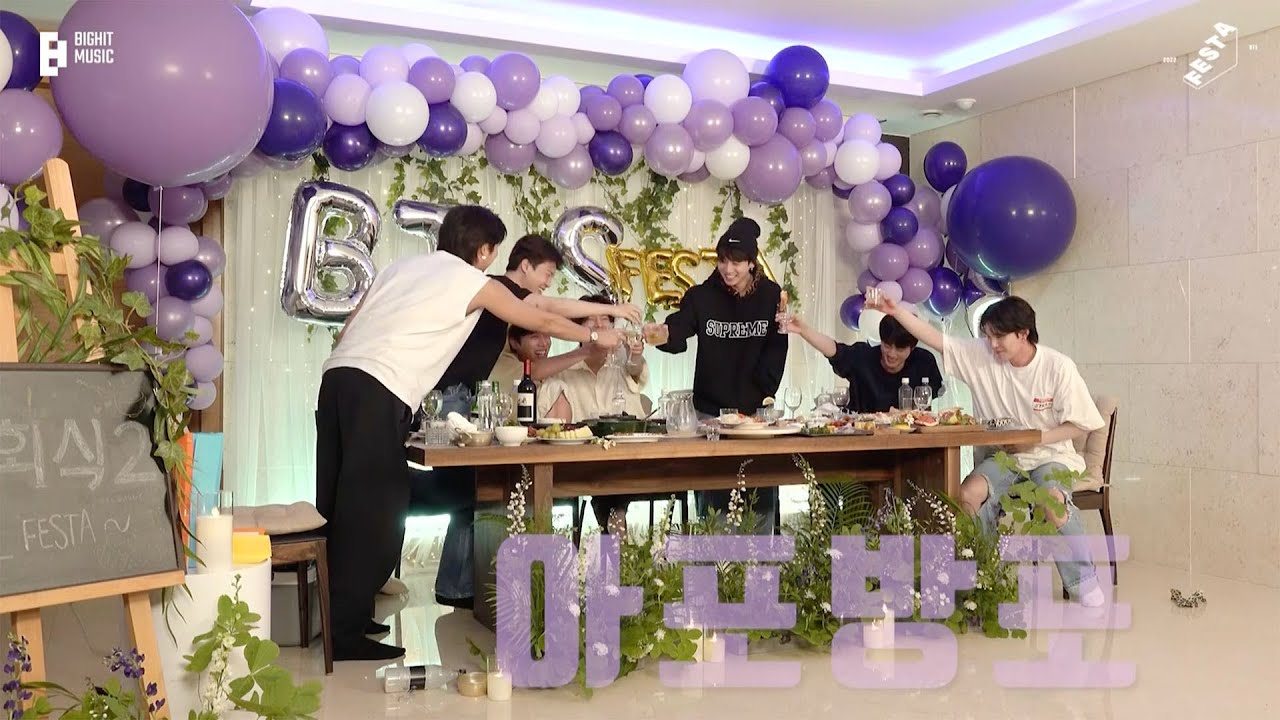 The members revealed that their shared home contract had ended. So, after 10+ years of living together, everyone now has moved and officially lives separately. Before, they all lived together in a dorm, and members shared bedrooms.

They described their unique interior decorating styles. Maknae Jungkook was exposed for having a substantial amount of mattresses and diffusers. RM‘s place was described as an “art house,” while Suga‘s was inspired by his father. The eldest member, Jin, was described as having a “newlywed” home.

It’s a bit surprising description. We already knew that Jin lives in a luxury apartment and has a collection of his most prized possessions on display for when you visit. 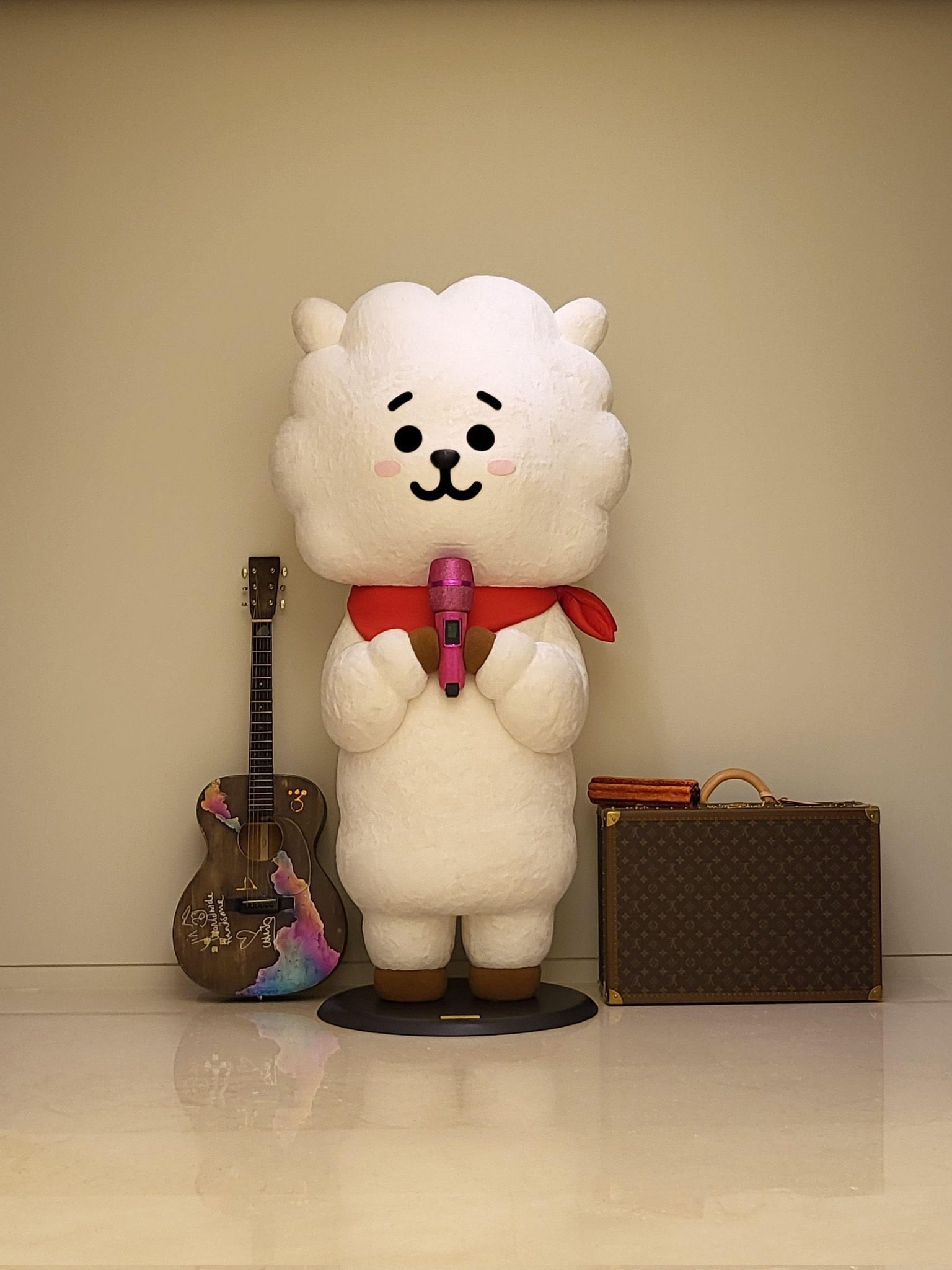 So, his home likened to that of newlyweds, seemed a bit strange. Nonetheless, one member’s reaction to RM’s words has caused suspicions among ARMYs.

Jin himself was shocked that his place of all would be compared to a newlywed home considering he had just revealed that he had spent most of his free time lately gaming! That certainly doesn’t sound like a newlywed, but RM defended his statement by pointing out that it’s “bright” and “white.”

Regardless, Jimin had a unique reaction to the conversation. He immediately started laughing, covering his face. Finally, he asked, “How much of all this can we air?” Is he implying that some secrets were just spilled?

Most didn’t think much of this conversation at the time. Yet, an ARMY (@zani__fj on TikTok) shared an edit, highlighting Jimin’s reaction to RM comparing Jin’s home to that of “newlyweds.”

The video went viral with 1 million views, and 205.2K likes in just a day. The comment section is filled with ARMYs suspicious that Jin may be in a secret relationship and that Jimin knows something… 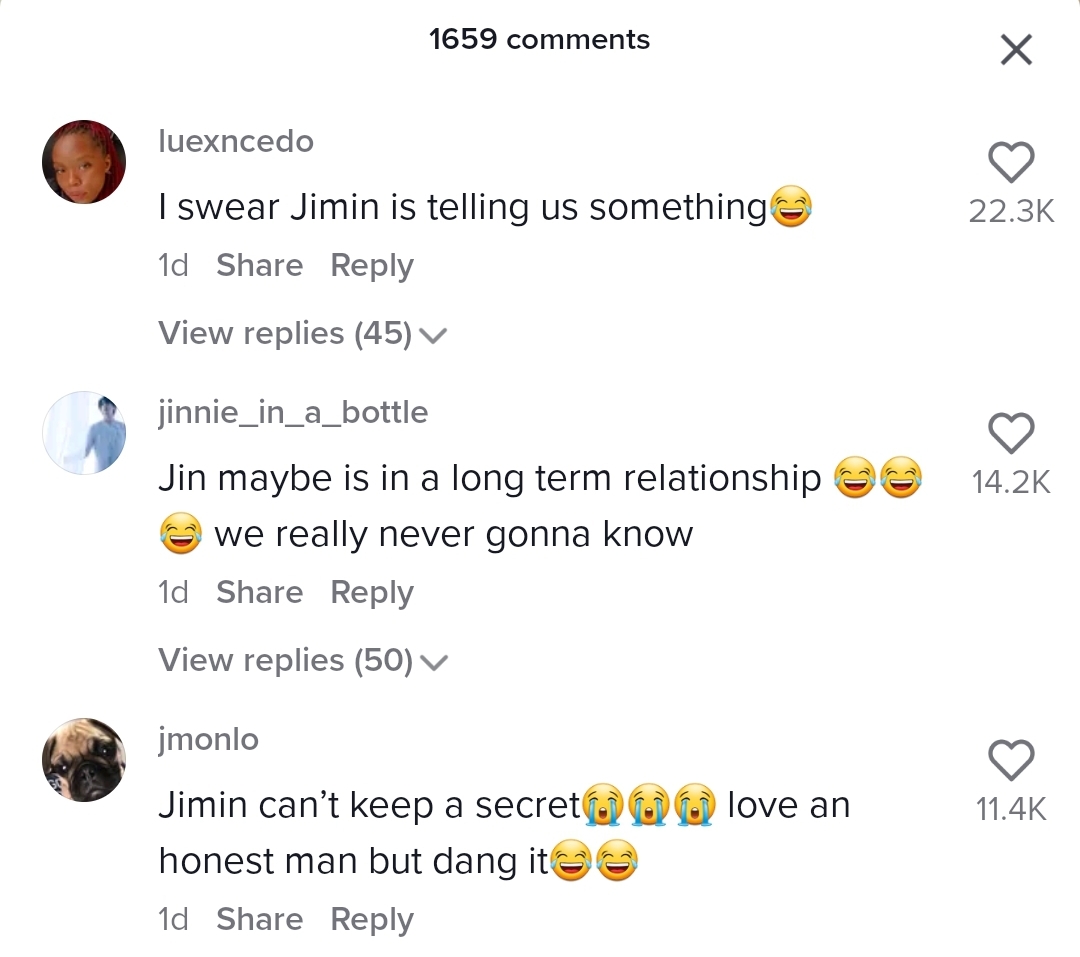 ARMYs definitely wouldn’t be surprised if Jin comes out as being at least in a long-term relationship. He is 29 years old, after all! 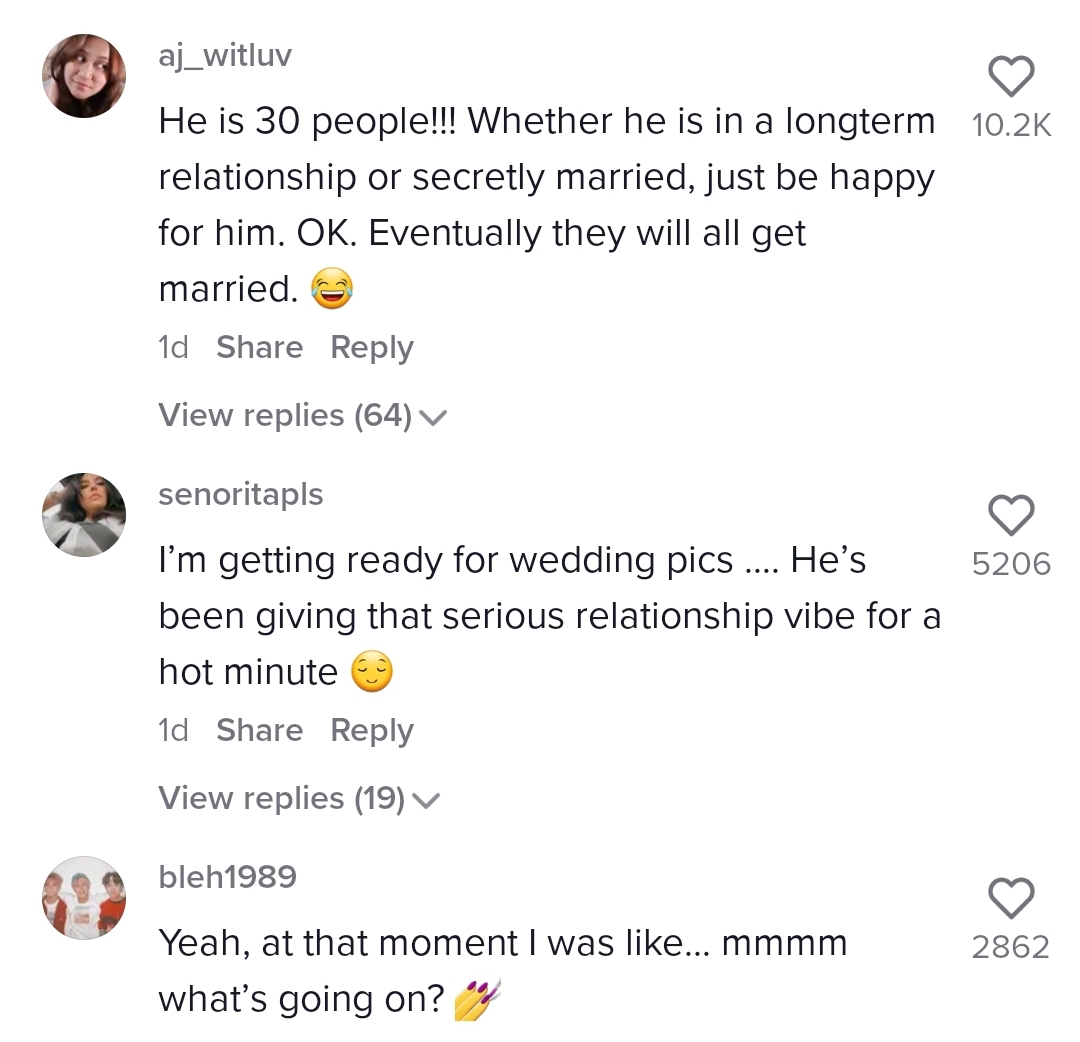 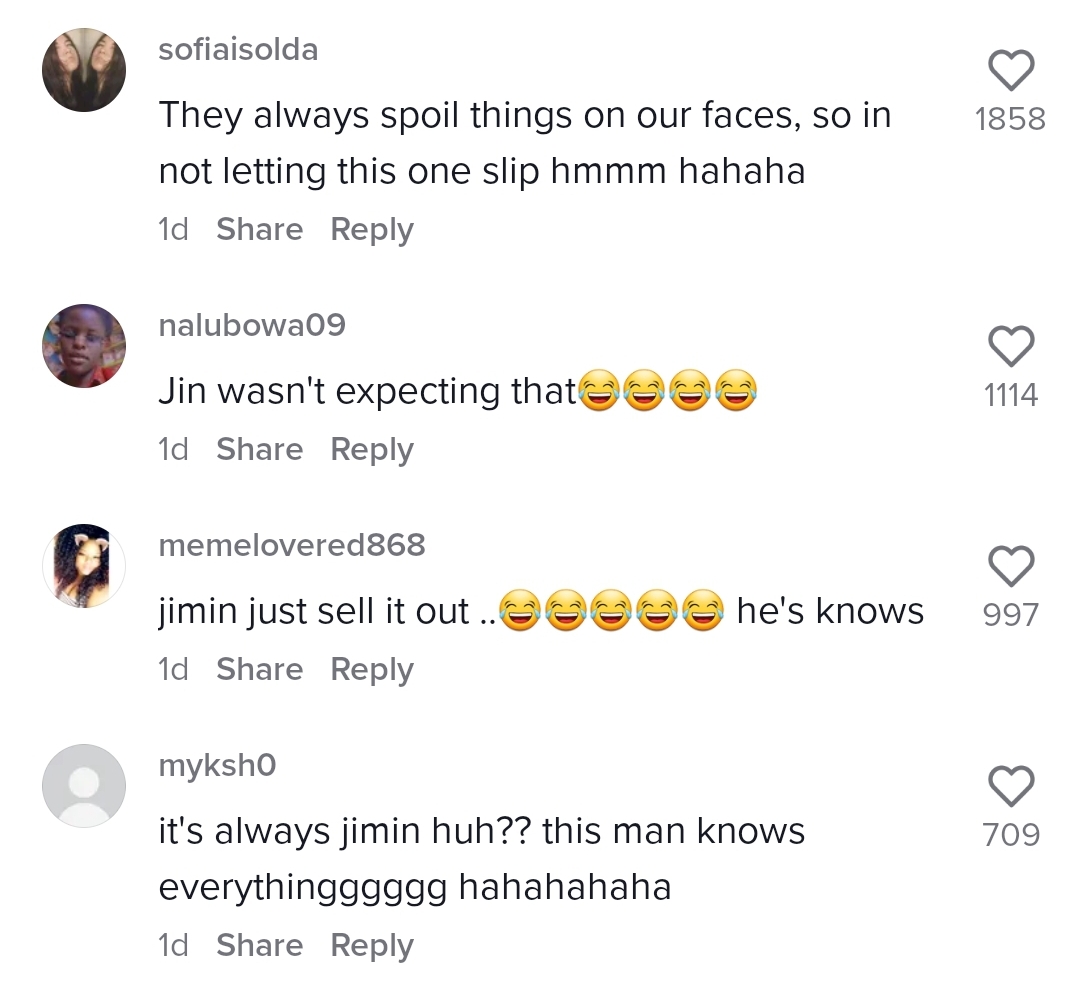 Besides, Jin had previously said he wanted to get married at 31. He will be that age soon! 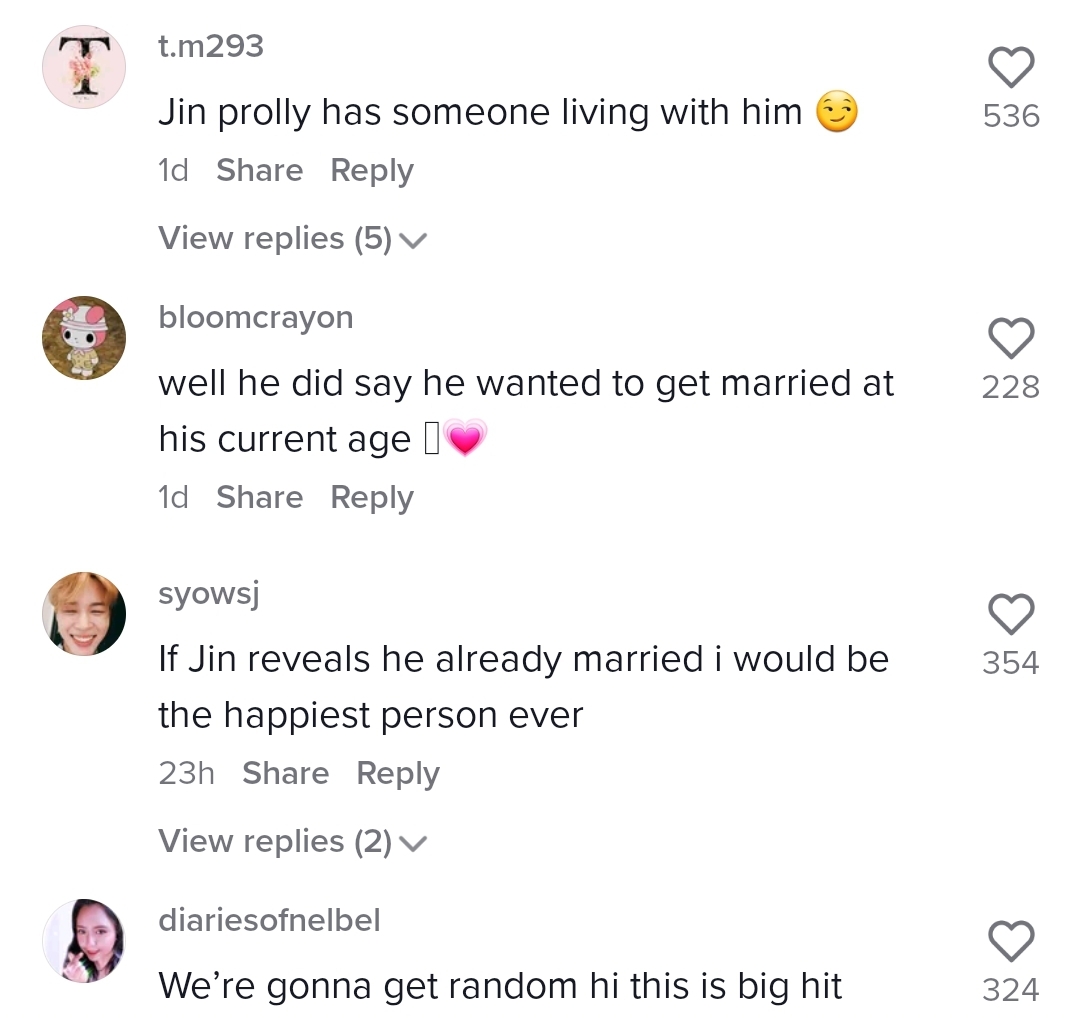 It would be ironic, though, if it turns out Jin, of all members, is in a secret marriage. For a while, ARMYs had a reoccurring joke that RM was the one who had a secret family.

Whether there’s any truth to the rumors, we always support BTS’s happiness! 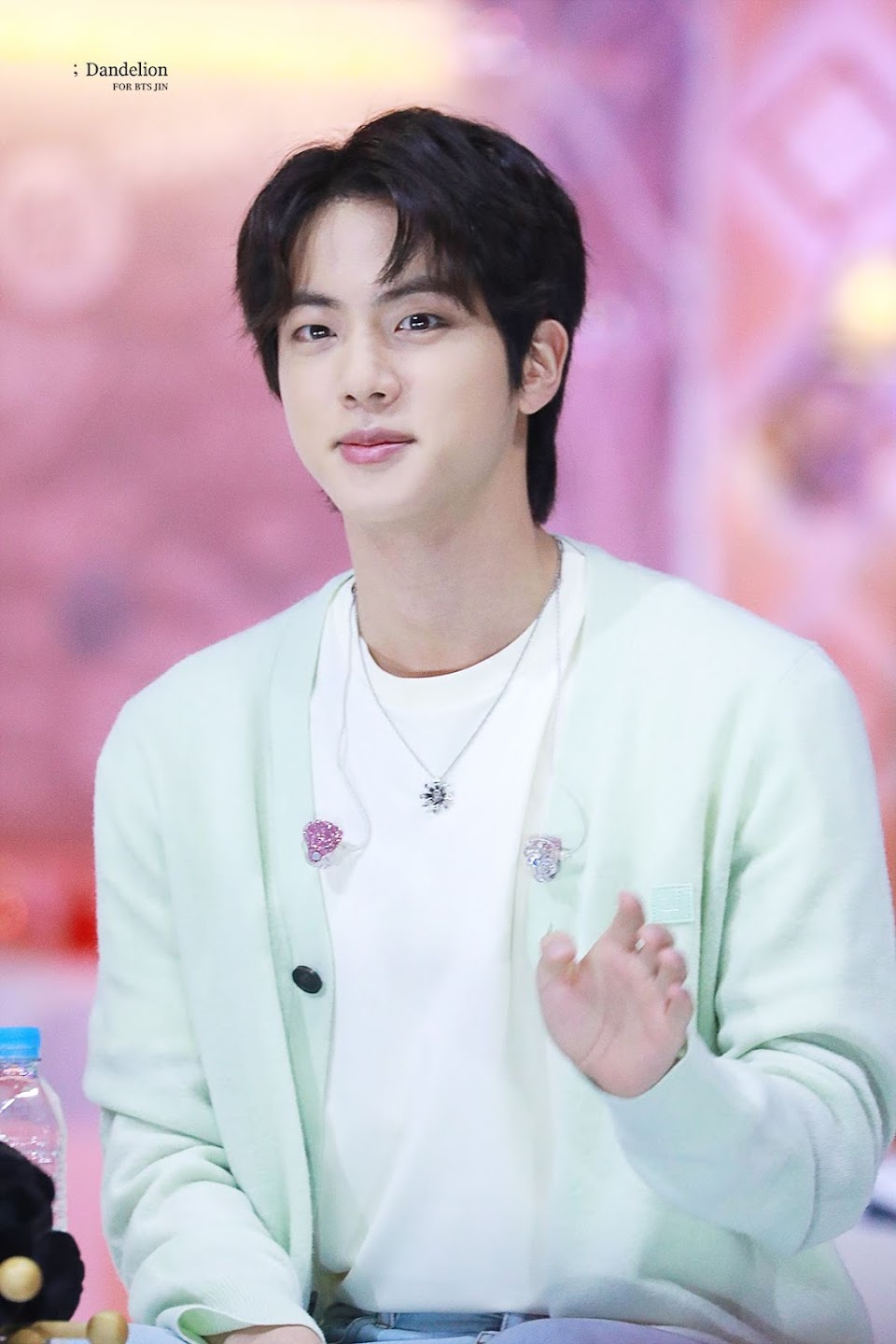